Why Magicians Never Reveal Their Tricks 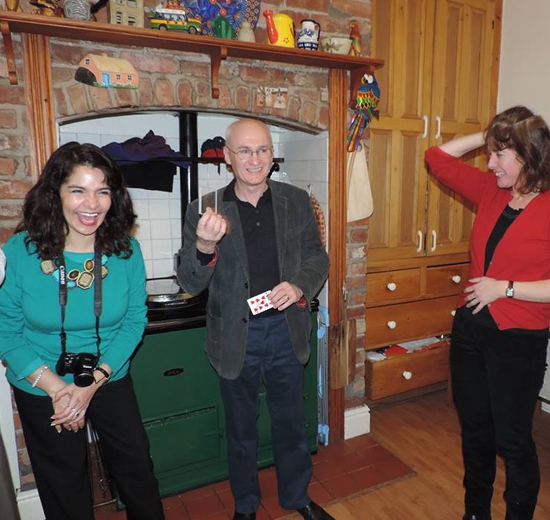 First and foremost, magicians never reveal tricks because it destroys the mystery. Every adult knows that magic doesn’t really exist. After all, if somebody really had magic powers they might be able to use them for something more worthy than finding playing cards or making rabbits appear from a hat…though the latter might solve food shortage problems.

What magic offers is a moment of Wonder/Surprise. We have just witnessed something that our mind tells us CANNOT happen…but, dammit, we just saw it happen.  After the initial surprise, the reaction is usually one of laughter or puzzlement. Look at the faces of the women at the house party I performed recently. A deck of cards just turned to glass while the spectator was holding it.

Now, if the magic secret is revealed the amazement is replaced by a swift sense of let-down. ‘Oh, so that’s how you did it…’ said in a falling tone of disappointment.

On a more selfish note, the magician has taken time and, usually money, to buy the secret and then practise and rehearse. Why should s/he give it away for free?

There’s even an ethical question here. If somebody creates a magic trick, I don’t really have the right to reveal it to anybody else, even if I have paid for it. Don’t forget, magicians’ livelihood depends on the secrecy.

Exposure of a trick can ruin it. Years ago it was common to see magicians perform with a floating cane. It was an incredible trick…until it was sold as a toy one Christmas. The secret was exposed (though, in all fairness, I think the modern audience had begun to guess) and that was the end of that.

“So, if magicians never reveal their tricks, how do they learn them in the first place?” I hear you ask. Well, that’s something I will cover in a future post.

In the meantime, if you’d like to see what can happen when a trick goes wrong, just click here.

If you’d like to treat your guests at a wedding, party, dinner, fund raiser etc. then why not contact me to see how I can contribute to your event? I might even teach you a trick.

(About the author: Frank Farrell performs stage and close up magic across the country)

This website uses cookies to improve your experience while you navigate through the website. Out of these, the cookies that are categorized as necessary are stored on your browser as they are essential for the working of basic functionalities of the website. We also use third-party cookies that help us analyze and understand how you use this website. These cookies will be stored in your browser only with your consent. You also have the option to opt-out of these cookies. But opting out of some of these cookies may affect your browsing experience.
Necessary Always Enabled
Necessary cookies are absolutely essential for the website to function properly. This category only includes cookies that ensures basic functionalities and security features of the website. These cookies do not store any personal information.
Non-necessary
Any cookies that may not be particularly necessary for the website to function and is used specifically to collect user personal data via analytics, ads, other embedded contents are termed as non-necessary cookies. It is mandatory to procure user consent prior to running these cookies on your website.
SAVE & ACCEPT
%d bloggers like this: